The Big Draw
selling the Soviet past
0 %
25 years since the end of the USSR: The story of a market like no other
This is a panorama drawing of a unique market in Tbilisi, Georgia that sells old Soviet hardware.

Click on the orange characters to get the video stories of the stallholders, and drag, scroll or use arrow keys to view the drawing.
The Big Draw: Selling the Soviet Past
By Andrew North

You won’t find it in the Tbilisi guidebooks, and it’s well beyond the tourist trail. But the first time I came to this sprawling open-air hardware market in the Georgian capital, I thought to myself: “I’ve got to draw this place.”

I had come as a customer, to buy some things for a home DIY job. But I found myself in a ‘Home Depot’ for the Soviet past, and the artist in me was fascinated.

Hidden behind an outer row of newer shops is a vast labyrinth of tightly-packed stalls trading in Soviet-era engines, electrical equipment and heavy tools. Known as the Eliava (after a nearby street), it sprang up in the hard years after Georgia won its independence from the USSR in 1991. There are hundreds of stallholders, with an inventory that ranges from Russian nuts and bolts, to gearboxes and septuagenarian power motors that once drove Soviet Metro escalators. And I decided to turn this mass of history into a drawing.

I focused on one part of the market and set about creating a 360-degree panorama of everyone and everything in my field of view. And after nearly four months of work, always standing in the same place, it became a 4 metre-long ink drawing.

I started with Vazha Jamagidze and the metal smorgasbord of Russian-made hand-tools and reconditioned bathroom taps that he sells from two small benches. He has worked here for more than 20 years, but his solid arms and shoulders speak of another life before that, when he was a Soviet Army wrestling champion. And as I got to know him and the other stallholders, the journalist in me saw a wider story here.

This is a free market selling the communist past - where some still wish it were the present. So it offers a unique window on Georgia’s transition and its often-tortured search for a new post-Soviet identity, pulled between West and East.

Everyone in the drawing grew up in Soviet-run Georgia; and some have struggled to adjust to the fast-changing country that has replaced it. Whereas most Georgians now lean west and resent Moscow’s past and present intrusions, among the denizens of the Eliava there is a more sympathetic attitude towards Russia and Soviet rule. It’s also more complex than that.

Democracy and capitalism have brought only “anarchy and filth” complains Vazha, worrying that Georgia’s Christian-Orthodox traditions are under threat from “Western ideas” like LGBT rights. But other stallholders had turned against Moscow precisely because of the communists’ persecution of the Orthodox Church. Getting closer to the West - and getting into the European Union and NATO - they said, was now the only way to secure Georgia’s identity and sovereignty.

At first I was the one answering questions about my identity. “What village are you from?” I was asked. I felt rootless by comparison as I explained how I was born in one city in Britain, but then never returned.

The bigger challenge was drawing each person in my 360-degree frame, working as quickly as I could before they moved, with the added pressure that they could see the result as soon as I had finished. That’s the paradox and the excitement of drawing. It is both slow and immediate.

That made it an attraction too, as the panorama took shape, with stallholders coming from further away to look and laugh at how I had portrayed their friends. “It’s not bad,” smiled one visitor as he looked at my version of Eduard. “But you haven’t made his nose big enough.”

Sometimes there were arguments, once even a fight. If I happened to be there on a key Orthodox holiday, such as ‘Mariamoba’, or someone’s birthday, I could forget working. They took my pens away and gave me wine instead. And Tariel, whose collection of muscular Russian motors I drew early on, locked away the drawing in his storeroom.

Once their homemade wine started flowing though, I could barely walk in a straight line, let alone draw one. The Eliava is as much a culture and a community as a market.

There was never going to be a future in recycling the past though, and many stallholders are struggling. More people can afford new hardware now, rather than making do with secondhand. “This is not really a business,” Mirian Nozadze said to me ruefully, gesturing at the piles of chunky Soviet nuts and bolts that are his mainstay. “We are just speculators,” he added, using a derogatory communist-era term for business-people.

But instead of a mid-way station to something better, the Eliava has become the end of the line for many working there - while the train turning Georgia into a market economy thunders on. It is a familiar test of wrenching change, and who bears most responsibility to deal with the consequences – the state or the individual.

“Who will bring back the old times?” sighs Taso Tsertsvadze. Like many who work in the Eliava, she is originally from Chiatura, a mining town in western Georgia that was hammered by the end of the Soviet Union and the collapse of the guaranteed market it provided. Now she runs a one-woman tea and coffee delivery service around the market. She wishes she could return home, but says “we have to cope with the new.”

The ‘new’ keeps coming. Several stalls closed while I was working on the project and two people in the drawing have moved on. So it is already a historical record.

One day I went to see Gia Andriadze, one of the market’s owners. We talked on the balcony of his penthouse office; atop a multi-storey retail complex he has built on space vacated by stallholders who have already given up. The future is mapped out below – new buildings are pressing in on all sides of the drab tin roofs of the original Eliava.

Most of those stalls will be gone in five years, he predicts: “They are selling nostalgia.”

Andrew North is a British journalist based in Tbilisi. Find him on Twitter @NorthAndrew and see more of his work at: sketchyreports.com 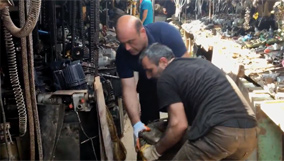 The Motor Seller"If the USSR had done something good for us, we wouldn’t have wanted independence." 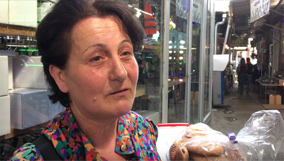 The Cigarette Seller"I didn’t know what poverty was. My children know all about it." 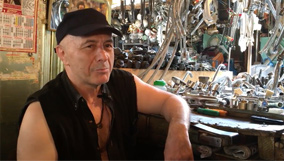 The Soviet Wrestling Champion"There was a little euphoria when the USSR collapsed, as if independence would be good." 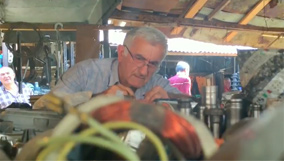 The Europhile"Archaeologists have shown Georgia is historically closer to Europe." 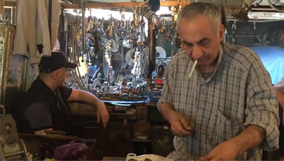 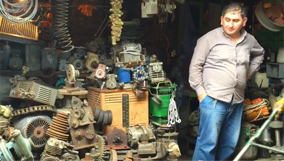 The War Veteran"We need a friend to stand up to Russia." 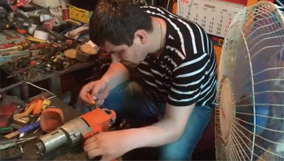 2008 War Volunteer"I was proud I had a chance to defend my country." 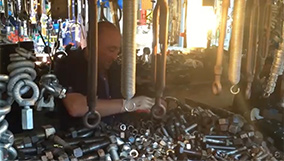 The Nuts and Bolts Man"We are just speculators." 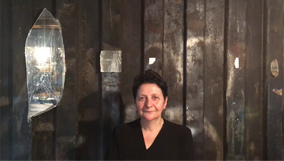 The Drinks Seller"Nobody wanted the Russians. We wanted independence." 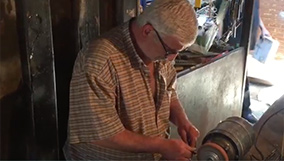 The Tool Seller"The Soviet times were good. I had a job, a salary. Now where are the salaries and jobs?" 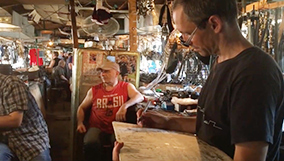 Behind the ScenesThree Months. 360 degrees. And One Big Drawing
Three Months. 360 degrees. And One Big Drawing
Credits
The Tool Seller
Name: Tamazi Dudashvili
Job: sells tools and spare parts
"The Soviet times were good. I had a job, a salary. Now where are the salaries and jobs?"
The Cigarette Seller
Name: Marina Esebua
Job: sells cigarettes, sweets and snacks
"I didn’t know what poverty was. My children know all about it."
2008 War Volunteer
Name: Otari Mujiri
Job: repairs and sells power tools
"I was proud I had a chance to defend my country."
The Skeptic
Name: Eduard Miroian
Job: sells tools and spare parts
Before it was Russia. Now America controls Georgia, Eduard believes.
The Europhile
Name: Giorgi Todadze
Job: sells tools, electrical equipment and spare parts
"Archaeologists have shown Georgia is historically closer to Europe."
The Soviet Wrestling Champion
Name: Vazha Jamagidze
Job: sells reconditioned taps and pipes
"There was a little euphoria when the USSR collapsed, as if independence would be good."
The Nuts and Bolts Man
Name: Mirian Nozadze
Job: sells Soviet-era nuts, bolts and screws
"We are just speculators."
The Motor Seller
Name: Jaba Nakashidze
Job: sells power motors
"If the USSR had done something good for us, we wouldn’t have wanted independence."
The War Veteran
Name: Tariel Saralidze
Job: sells power motors and welding equipment
"We need a friend to stand up to Russia."
The Drinks Seller
Name: Taso Tsertsvadze
Job: sells drinks and snacks
"Nobody wanted the Russians. We wanted independence."
{{title}}
{{quote}}